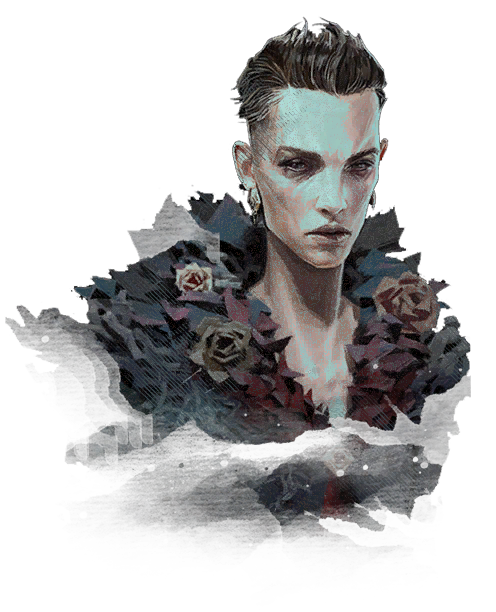 Delilah Copperspoon is the main antagonist of Dishonored 2 and the Dishonored DLC The Brigmore Witches, and is mentioned in Knife of Dunwall. She discovered painting as an outlet for torment and apprenticed for a while with Anton Sokolov. She also sculpts and according to Meagan Foster, is a better sculptor than Sokolov.

Main article: The Knife of Dunwall

Delilah is first mentioned by The Outsider at the beginning of the story. She herself is not seen, although Daud interacts with a statue that she speaks through.

Delilah is encountered in the Brigmore Manor, where she partakes in a ritual to possess Emily Kaldwin and use her to usurp the throne. She is defeated by either killing her or swapping the painting out with a painting of The Void.

Delilah is brought back from The Void through a seance held by Luca Abele, Kirin Jindosh, Breanna Ashworth, and the Crown Killer. She removes her soul from her body and stores it in an effigy, rendering her immortal. She later wrests the throne from Emily Kaldwin, Jessamine's rightful heir. Delilah claims to be Jessamine's half-sister, the daughter of the late Emperor and a kitchen maid. Orphaned at a young age, she made her own way through a hard life, which honed her shrewdness and cunning.